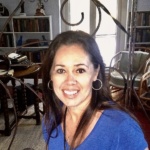 Like her main character Charlie, Ruthie Marlenée grew up hearing wild, colorful stories about her wealthy, entrepreneurial grandfather.  Later, knowing she liked to write stories, her father approached her.  “Kid, you wanna story?  Watch Chinatown.  That’s who killed your grandfather.”

Dubious, dismissive, yet intrigued and also a lover of film noir,  Marlenée watched the movie. It prompted her to do further research, leading her down a different path. She discovered a story not just about murder, but about greed, jealousy, and the psychological havoc wreaked upon the little boy Charlie, and consequently his descendants.

The result is her novel, “Curse of the Ninth,” a tale based on real and imagined events. After almost twenty years since the kernel of the idea was planted, after going back to UCLA to workshop the story, after earning her Writers’ Certificate in Fiction and a nomination for a James Kirkwood Literary Award for “Curse of the Ninth,”  Marlenée is happy to find a home with the WiDo/E.L. Marker Family of Publishers. A company  Marlenée describes as “a personable and genuine organization willing to take this project on.”

Marlenée believes that writing is about using your imagination and so sometimes when she writes she can’t help but add bits of magic or elements of speculation.  In her current novel, she marries the notion of the Curse of the Ninth Symphony, where a composer is doomed to complete a tenth, together with the Buddhist meditation practice of Phowa, the transference of consciousness at time of death.

Marlenée likes to read the kind of books where she can imagine the movie, so needless to say, once she’s completed one of her books, she adapts it into the screenplay.  When working on a novel, it’s a 24/7 sort of gig.  When not physically writing, she can be present amongst family and friends and function pretty well, but in her head she’s always working out an idea or a scene and that’s what keeps the smirk on her face.

Ruthie Marlenée is a mother and a new grandmother and a wife to a husband she adores.  She loves to read, write, see movies, play tennis and travel. She enjoys all the gifts California’s nature has to offer.  It’s no wonder with so many wonderful hobbies that she has so many wonderful stories to tell.

Marlenée found the WiDo Family of Publishers through a subscription of Poets and Writers.  She says, “I liked the idea of a smaller press run by a family passionate about literature and willing to give writers with good stories a chance.”

We couldn’t be more excited for her to be joining our family with her book “Curse of the Ninth,” and hope it’s just the beginning of a beautiful story for all.

Marlenee has earned a Writers’ Certificate “With Distinction” from UCLA.  Some of her writing can be found in  Silver Birch Press, Long Story Short, and The Coiled Serpent Anthology.  Her screenplays have been recognized at film festivals, domestically and internationally.  She first published a novel Isabela’s Island in 2004.  She has completed a fourth novel, ​Agave Blues​​.  Learn more about the author at her website RuthieMarlenee.wordpress.com

One thought on “Curse of the Ninth”

This site uses Akismet to reduce spam. Learn how your comment data is processed.